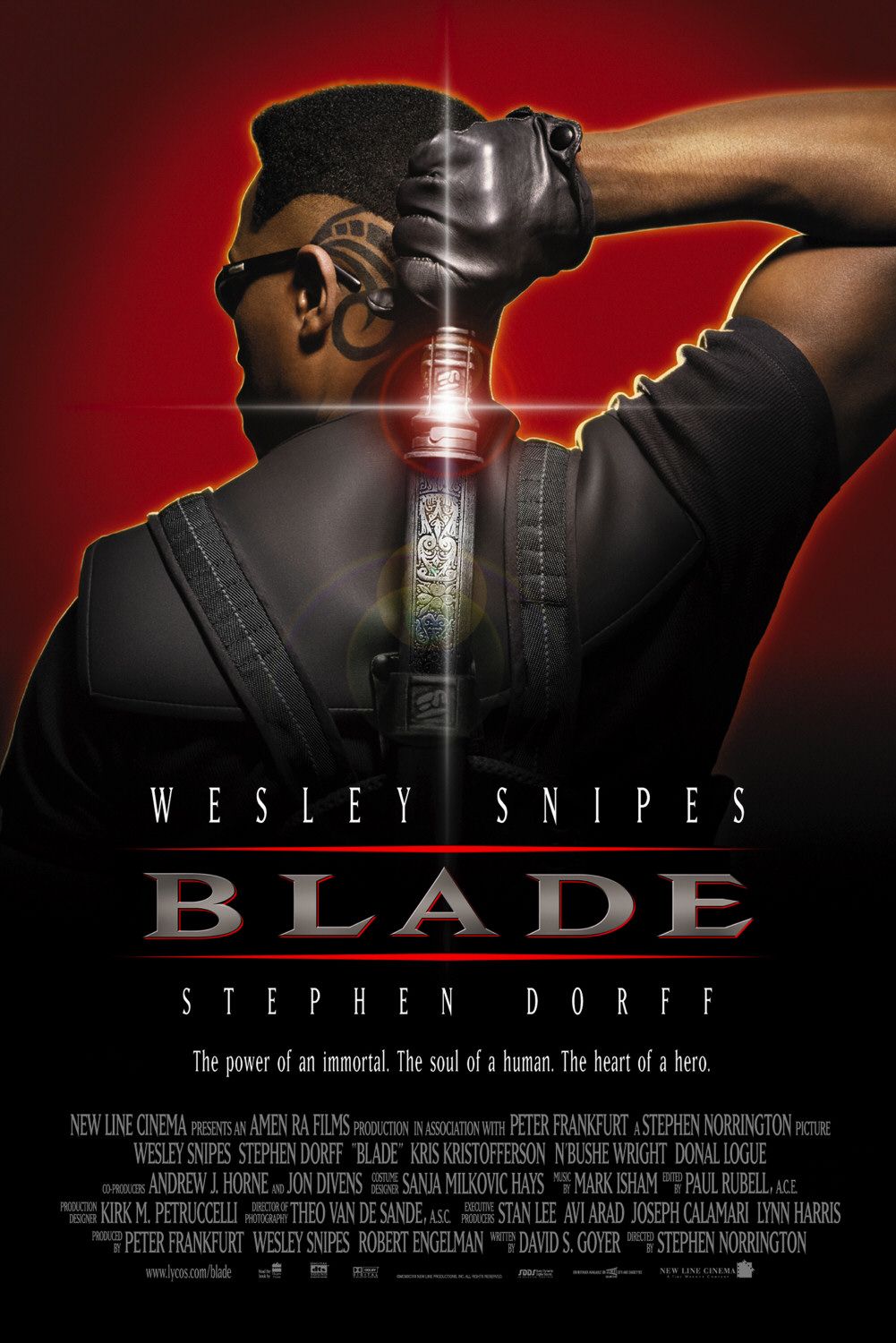 This post is the nineteenth in my 31 Days of Vampires! series for October 2014. 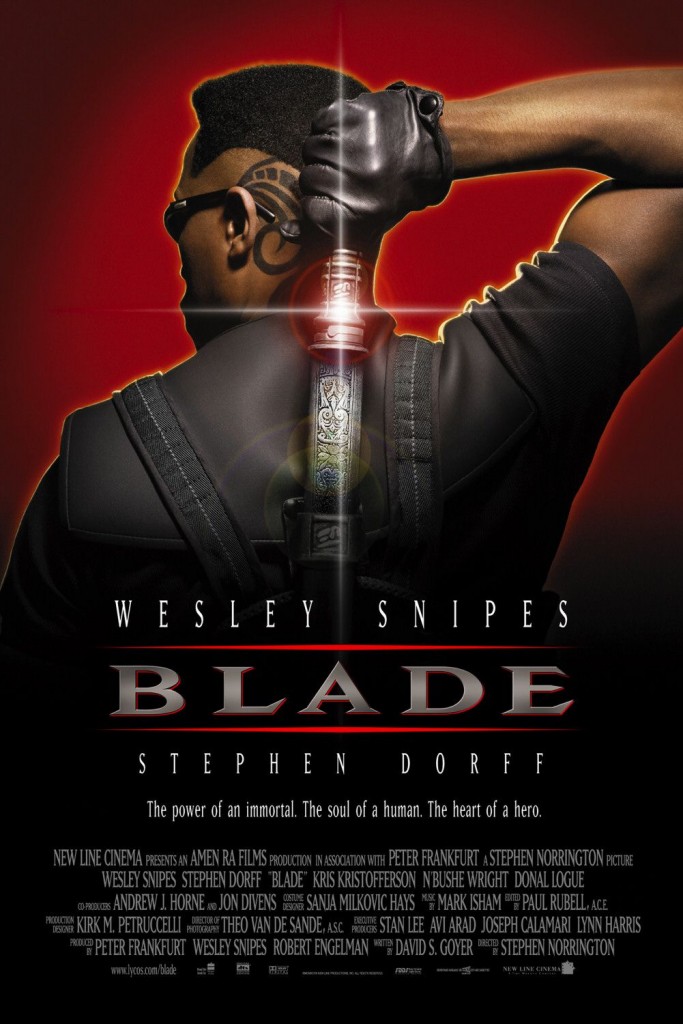 Do you like The Matrix? Sure, we all do!* Well, Blade reminded me of The Matrix (they came out a year apart). Certainly it’s easy to get the ethos mixed up – the late-nineties/early-’00s spawned a glut of goth-tech science fiction/fantasy in mainstream action films. But Blade is easily the stand-out with regards to vampires and the supernatural.

We’re first introduced to the vampires via a rave – hundreds of vampires and seemingly one or two human victims. And of course: blood-spewing fire sprinklers (Note: this is not the most annoying rave scene in the abovementioned genre I’m talking about. Maybe not even top five.) So: Blade shows up. He’s part-vampire in some way – and he’s here to kill the vampires who eat regular people (which is, most of them – it’s never explained how hundreds of vampires manage to massacre people left and right without detection). Blade is fierce – as strong as a vampire but without any of their weaknesses. He keeps his thirst for blood at bay with science-science-mumbo-jumbo blood serum. The serum is starting to become ineffective (ohnoes!) but luckily he’s about to run into a damsel in distress who happens to be a lady-hematologist.

More vampires show up, and have meetings. Naughty vampires wearing sober leather trench coats or other GAP/”urban” style accoutrement are introduced and played with varying degrees of scene-chewing hamminess: Stephen Dorff (as l’enfant terrible vampire upstart), Udo Kier (does he ever just play like… a normal dude, in a movie?), and Donal Logue (annoying us with frat boy/vampire antics). Kris Kristofferson flips his hair and mumbles as Blade’s grizzled mentor, Whistler. A very small role for the talented Tim Guinee.

The gore in this film is over-the-top, depersonalized, and dull, delivering almost no punch. It’s pretty obvious who is going to live and who is going to die. The bright spot in the film is Snipes, who seems born to play the role of the relatively non-tortured soul out on a single mission to kill off vampires. As Blade, Snipes provides a powerful, beautiful and compelling presence, and even delivers what little comedy the film really has (in the final fight scene, he turns to look over his shoulder and mouth, “What the f*ck?” at just the right moment).

Blade spawned from a comic series (yet again, here for this month’s vampire slog), but is only one of about three films that star black male superheroes. (No. I mean it. Three. And there’s only been a handful of supporting superhero roles for black men.) That’s a sad thing. Let’s hope for more in the future! 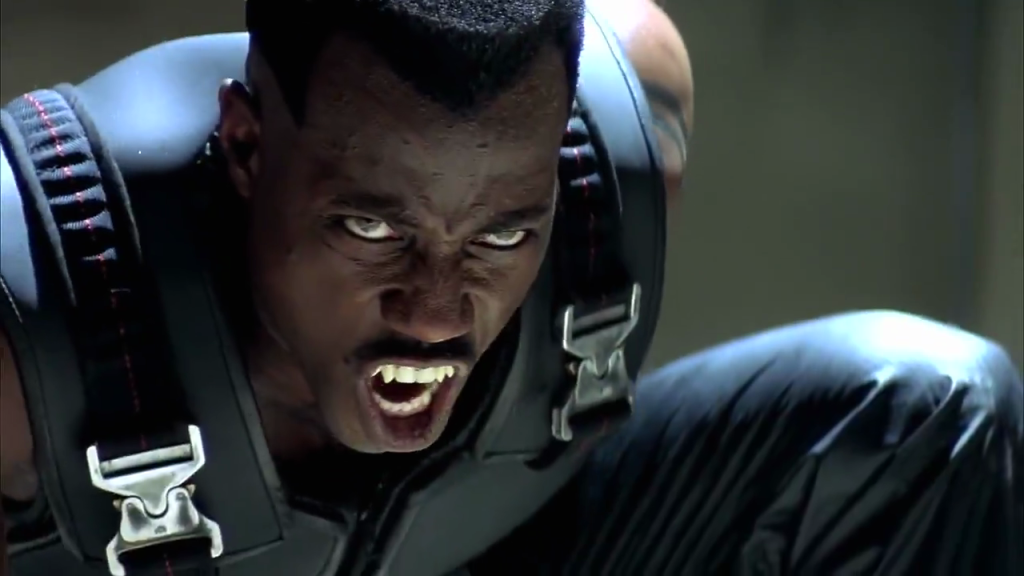