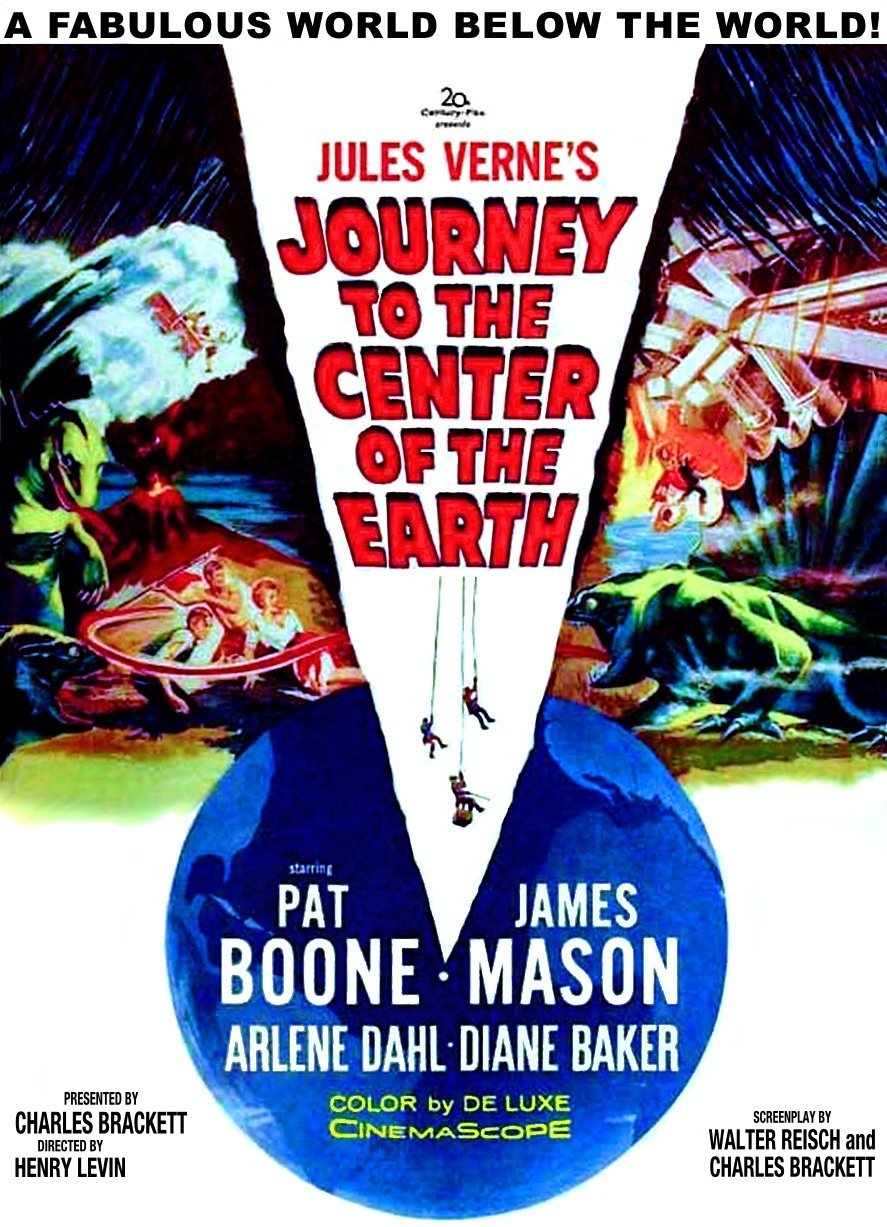 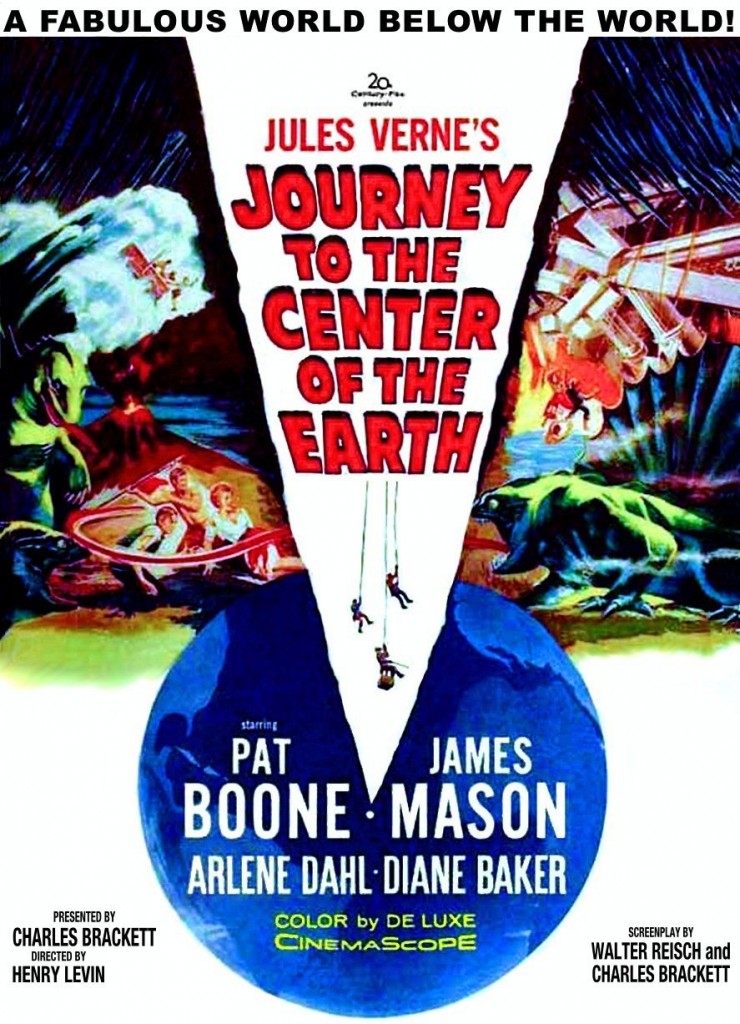 As far as I know, Journey to the Center of the Earth (1959) is the first cinematic version of Jules Verne’s 1884 novel Voyage au centre de la terre. The book, which has not held up as well (scientifically) as Verne’s other efforts, is the adventurous tale of a medieval Icelandic scientist’s doomed mission to to the center of the earth – and the repetition of his mission in 1863. The trailhead? An extinct Icelandic volcano christened Snæfellsjökull.

And what do our adventurers find? Geologic wonders, manmade and natural dangers, creepy critters – and the lost city of Atlantis. Do they make their safe return?

You’ll just have to watch!

Helmed by seasoned director Henry Levin, the 1959 film took a few liberties: adding to the story a few mission rivals, a lovely (and tough, and smart) widow, and – a duck! (The duck is totally legit by the way!) The story’s main characters are Professor Lindenbrook (James Mason), his soon-to-be nephew by marriage Alec McEwan (crooner Pat Boone), adventuress Carla Geotabaug (Arlene Dahl), and their Icelandic guide Hans Belker (Peter Ronson, an Olympian who appeared in this film only). Tailing them is the evil Count Saknussemm (Thayer David), who will stop at nothing to claim the mission as his own.

And let me tell you, if today’s adventure films served up fare this balanced, fun, exciting, and interesting, we’d be a lot better off! 1959’s Journey is charming and adventurous enough to easily leave the remakes – especially the most recent, and its sequel – in the dust.The first “special effects” of the film – adequate and beautiful, and fairly advanced for the era of film – start about an hour in. This decision is not a creative failing, but rather indicitive of the work the film put in to develop relatable characters (how James Mason can be a pedantic, imperialist, rude, sexist jerk and still be lovable, is testimony to his charm, I suppose). Boone seems to be served up as some beefcake in stripping down to tiny shorts, while Alene Dahl as Carla Geotabaug is wonderful as an even-tempered, intelligent, feminine and feminist heroine. Interestingly, she is probably the most valued member of the team, although just try to get Lindenbrook to admit it! Heck, even the duck Gertrude is a pretty awesome character!

The music, colors, performances, and special effects make for a pleasing mix. Not to mention the film is refreshingly European in showcasing several languages and nationalities – Icelandic, Swedish, French, Scottish, and Italian to name a few – as if this is totally no big deal. Notably, the film changes the origin hero – a German named Otto Lindenbrock – to a British Isles version – Sir Oliver Lindenbrook. I guess Germans are not invited to this party!

A wonderfully-paced, family-friendly adventure story. I’d love to see more of its caliber in films today. 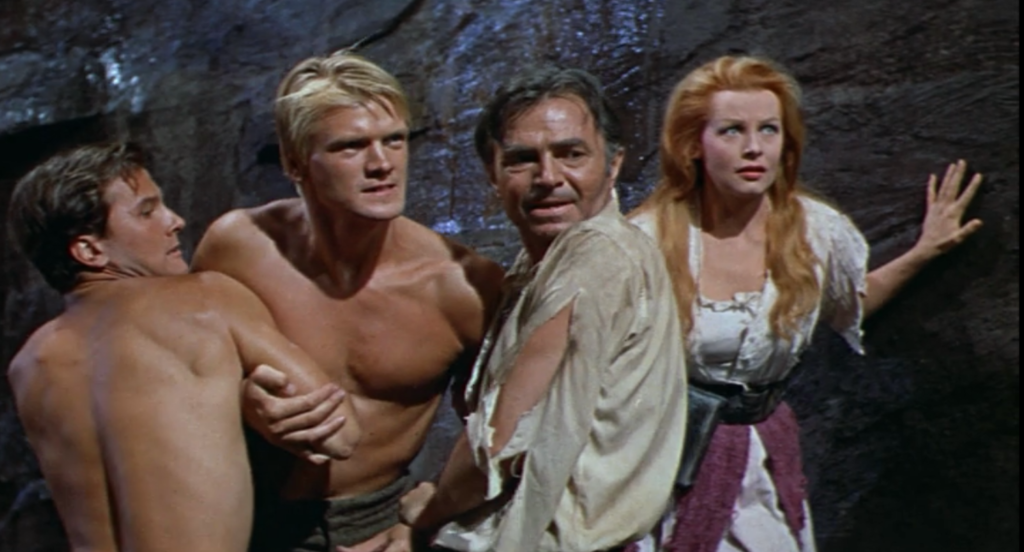