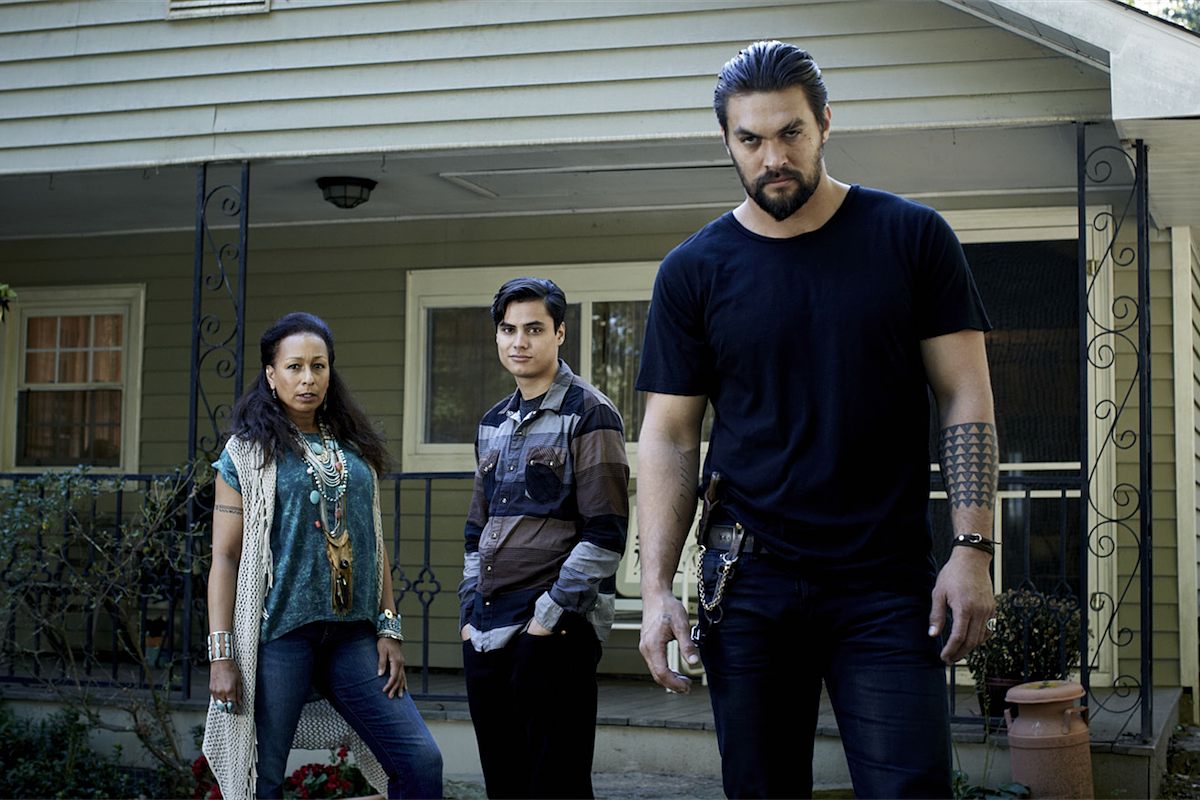 You may or may not know that here at B-movie BFFs I do, now and then, watch a little contemporary television – top-drawer television. Lately I seem to vacillate between implausibly-parochial BBC parlor-room murder mysteries, some surreal and dark comedy –

Now the problem with really bleak, indie, gritty neo-noir – if you don’t mind a little (or a lot of) violence, and I don’t – is, well, it’s horrifically bro-tastic. Emily Naussbam sums it up well in last year’s New Yorker article:  the genre is often exploitive regarding everyone but the white males central to the story. Today’s eXXtra-seXXXy uber-violent noir wallows in, to use Ms. Naussbaum’s phrase, “heroic male outlines and closeups of female asses”.

And that’s when the women in the storyline aren’t getting even worse. Those of us tired of watching women receive second-billing, fetishism, denigration, and worse of all commodification, have a difficult time getting our noir itch satisfyingly-scratched. We want our bleak crimescape fantasy without having to sell out the part of our soul that say, likes women and thinks of them as actual human beings.

Happily, however, there is a lot of great television out there – in fact, so much I can’t get around to watching it all! These last few months I’ve put some time in and found some pretty good cop telly to share with y’all. Trust me when I say the following series – all still in effect – are incredibly awesome, and perfect for rained-in days at home. And while not every offering gets my Feminazgul Seal of Okayness™, all of these shows are great viewing and less egregious in their ickiness than other television counterparts. 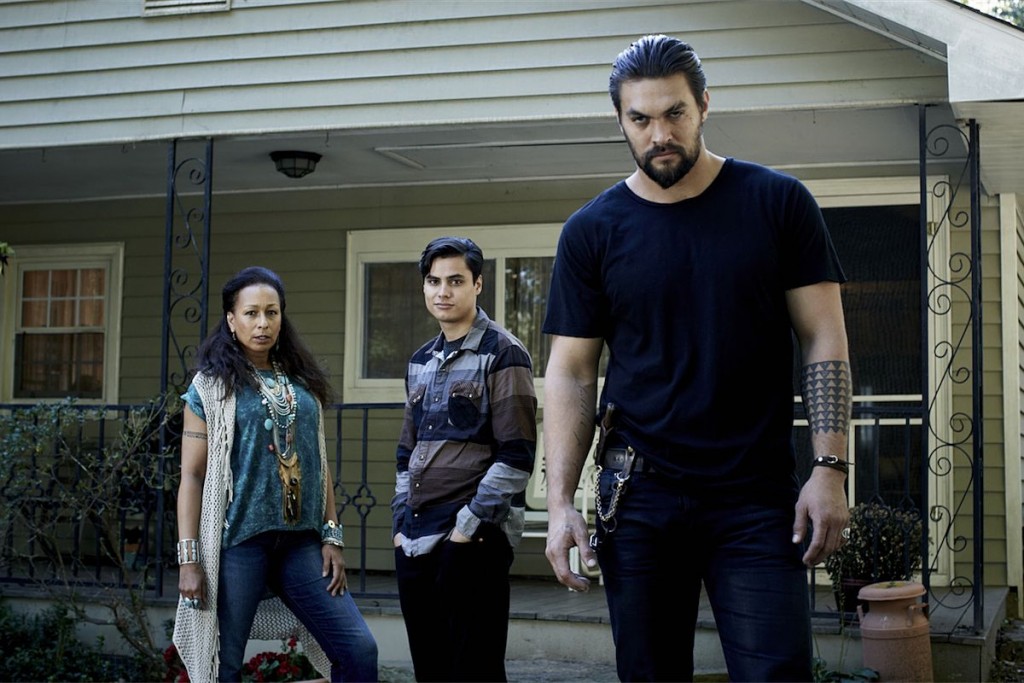 This frankly depressing (but good! really good! I promise!) Native/cop intrigue (SundanceTV’s second fully-owned scripted original series) not only knocked my socks off, but it tricked me – several times. Set in rural New Jersey, the racial and class tensions woven into the drama are fairly subtle (by TV standards), but feel very real. And these social and familial ties are fully drawn-upon as we progress through the story. As it turns out, the events in the plot strain credulity; but isn’t that noir, always? A fantasy, a dark one, where the forces of good are doomed or near-doomed – the hero struggling in a can’t-win setup set in ghastly, dismal terrain.

And let me get this out of the way: I’d watch “The Red Road” just for the Jason Momoa. He plays a sexy-scary-badboy (surprise!) who is given some warmth and a backstory that ended up reeling me in hook, line, and sinker. His co-star, Martin Henderson, was also a surprise, and I will probably hunt down a few more of his performances. Channeling rugged good looks reminiscent of Luke Wilson – and devious, slimy good looks reminding me of a young Dennis Hopper – his character arc had me confused as to “bad guy” versus “good guy” – the entire first season. The actor sheds his New Zealand accent perfectly, and embodies the Good Family Man (or is he? Nah, he’s not) valiantly trying, and failing, to set up the world to his liking.

The women in the film are, unfortunately, relegated to being wife/mom/sister/daughter as per usual, although there too we are in for a couple surprises. A few of the women who seem entirely unrelatable or even villainous, are given enough storyline to begin to convince us otherwise. I’m hoping future episodes let these women come to the fore of the story, although I won’t hold my breath.

I finished the first season feeling pretty tense, and wanting to see events through to the end. And while ultimately it looks like the program is going to head into terrain I don’t typically enjoy (to wit: forgiving and redeeming a character even after a cold-blooded murder or two, so we can have more juicy brother-on-brother betrayals), it is pretty likely I’ll keep up with the series. 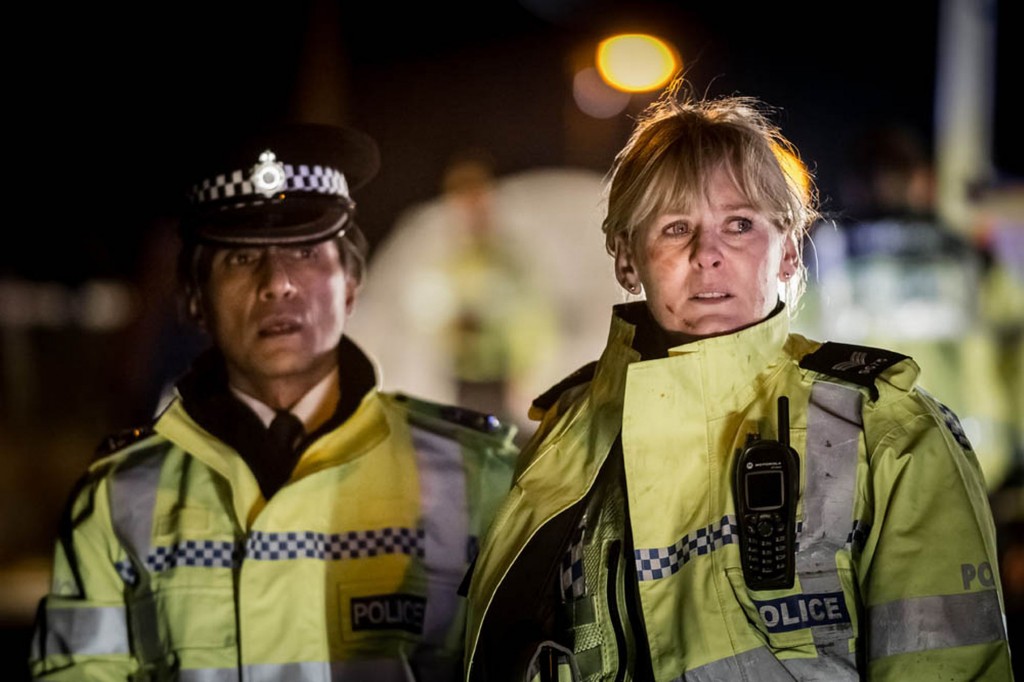 It’s about time we get a gritty cop drama with a lady cop front and center – and with women writing, producing, and directing. End-of. We’ve had a few great ones – but far too few. Like: three of them. It’s beyond depressing.

But “Happy Valley” goes for it – and succeeds entirely.

A kidnapping story is, for me, a lot like a war film set in a submarine. I’m tense from minute one! The show, as cop dramas go, is near-flawless: stressful, violent, sad, heartwarming and heartwrenching – and it boasts the ratings to prove it. Fans of cutie James Norton might have trouble washing his character of Tommy out their brain, because lets face it: he’s a bad ‘un. Star Sarah Lancashire is simply thrilling, of course. Despite some graphic violence by some baddies, perhaps the hardest parts to watch are the moments everydayman Steve Pemberton is onscreen. Give the show a go, and you’ll see what I mean.

Interestingly, this series received some censure in the papers for showing too much violence against women. Hear that, TV-land fans? As long as your women are beautiful, naked corpses you can play with that as much as you like – and even talk about or show their sexual torture as graphically as you see fit. But you can’t show a woman heroine getting beat up, looking beat up – and prevailing despite the beating, and moving on with her life – like so many male cops do in these things.

The series is fabulous in every way, and I’m quite sure I’ll re-watch the first season once the second season is available to me. 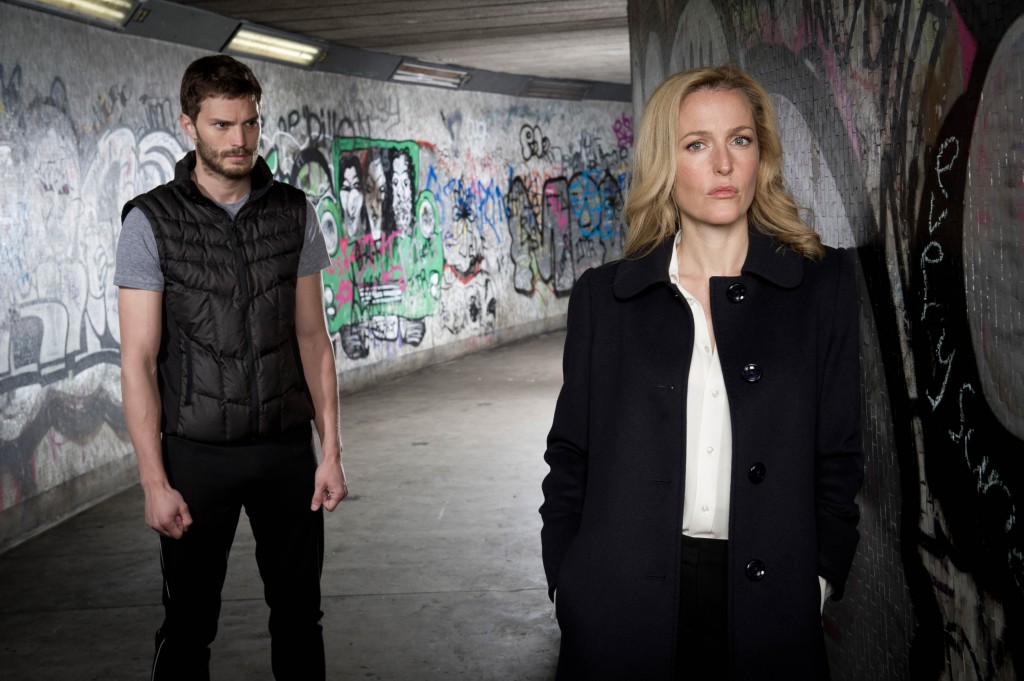 Serial killers are pretty rare, but it seems the men in the Western television- and film-production world are in love with making movies about them. And making these guys AWESOME! Gee, I wonder why?

This series, set in Belfast, is stylish, grim, and well-paced. That said, there are some serious problems peeking in during Season 1 that are further realized in Season 2.

Because when it comes to women,”The Fall” is pretty confused. If it weren’t for the lead, Stella Gibson (played with precision by Gillian Anderson), I’d have bailed early on. Gibson is, in my opinion, the sole example of a woman-positive element to the series (see also: Sarah Linden in “The Killing”). Take her away, and the show is just as misogynist, reductive, and trite when it comes to the women in the story – women who are getting hacked up, or cheated on, or both. Inexplicably the series seems to be in love with the bad guy, which is far less interesting than we might expect (although, fans of 50 Shades might get a kick out of him). I’m on the fence as to whether I will watch the next season, but there is no doubt in my mind that viewers are well-served by the series – Anderson in particular.

Because, and it has to be said more than once, Stella is pretty fabulous. She’s confident, non-demonstrative, sexually-aggressive (and bisexual! yum!), and very good at her job. And she’s kind of a jerk (see also: Jane Tennison in “Prime Suspect”). She’s watchable, she’s complex, and she has me on the edge of my seat. Plus she wears amazing silk blouses without any evidence of pit-stains. My hero(ine)! 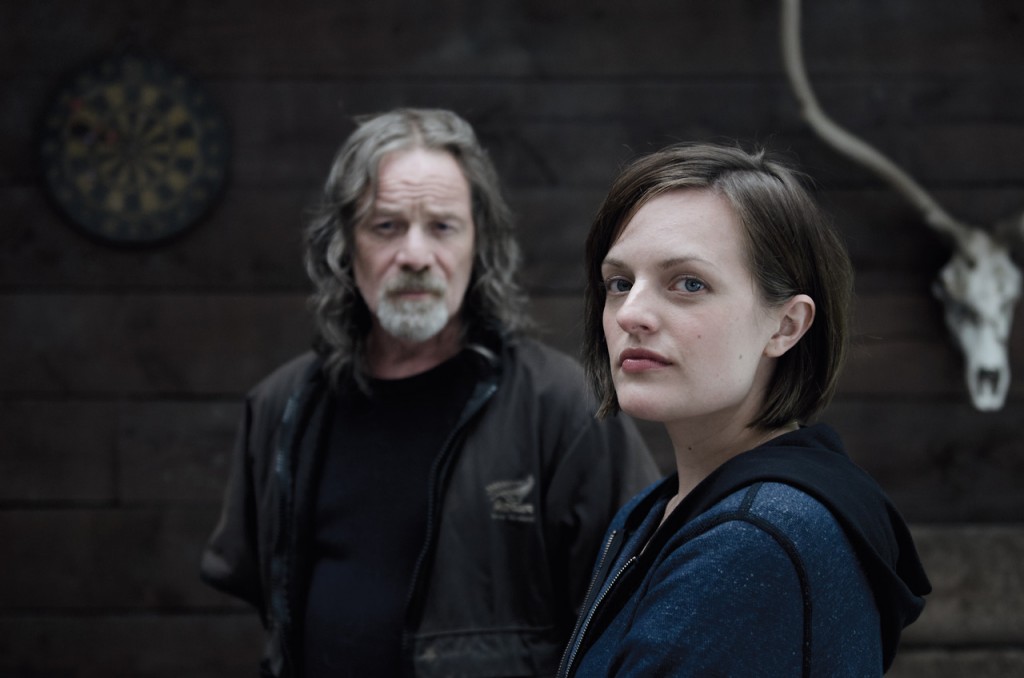 With Jane Campion serving as co-writer and co-director, you know you’re getting something good! (or something kind of weird, and navel-gazey, and taking-itself-too-seriously, but also really good despite that).

Well, of Campion’s works, this is my favorite (so far!). The miniseries opens with a beyond-depressing concept, the kind we’re used to in television – a girlchild pregnant, wading out into the water to die. But let me tell you, this story goes places that are utterly new. Peter Mullan, Holly Hunter, David Wenham, and Elizabeth Moss knock it out of the park with gripping, gritty performances (I love Mullan because he can be a really bad guy, or a really good guy!). There are women in the series that look like actual women – not Hollywood’s version of women. Rare as hen’s teeth, and much-appreciated!

As for the story, I didn’t find the developments predictable (or at times, very realistic – but again, that’s that noir underbelly), although the underlying conspiracies at work are very familiar. Simply put, “Top of the Lake” is some of the best television I’ve seen. If you like atmospheric thrillers, this business has it all – and then some. 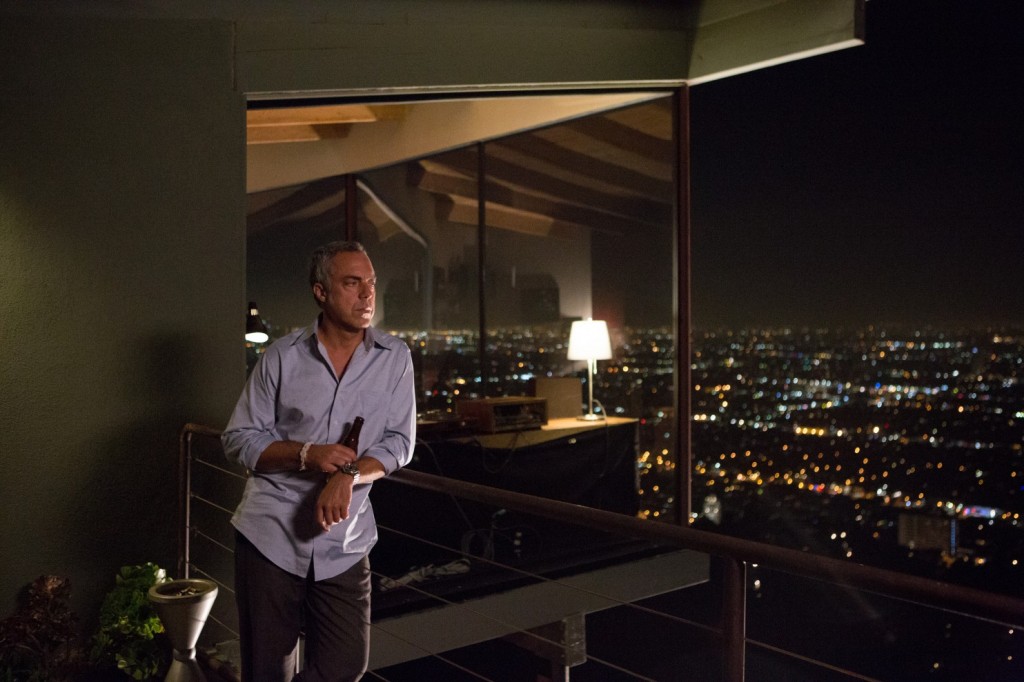 Of the five offerings in this piece, “Bosch”, Amazon Studio’s police procedural, will look most familiar to other cop-drama subscribers. In fact, it is hard to put my finger on what makes the show so great. Certainly, as someone who hasn’t touched the source novels, the plot and crime detail were not especially predictable, and I appreciated that. However, I suspect the first season more or less mashed two novels together – and this shows.

Instead of Bosch being a white male cop at odds with his authorities, who drinks, and has inner demons, and a girlfriend half his age – he’s… well… I guess all that still applies. That said, Titus Welliver‘s Hieronymous “Harry” Bosch is, quite simply put, not a macho dick, and that’s pretty refreshing. He’s a painfully-straight, regularly-burdened dude who has a pretty icky job. Yes, he’s an absentee father (yawn!), but he’s not at odds with his family, and his teenage daughter is on her best behavior when he pops up – not her worst – which reads as a pretty realistic response for a child with an absentee (and thereby glorified) male parent.

And Bosch’s half-his-age girlfriend? Well, she’s played by Annie Wersching, an actor only 16 years Welliver’s junior (which, in Hollywood copland, is like casting an ancient mummy-lady). More to the point, she has her own storyline, her own agenda, and the relationship between her and the eponymous character is well-written and not just about us seeing her nakedness. (Don’t worry, you’ll still get to.)

“Bosch” has its flaws. Case in point: his three-million dollar view and jazz LP lifestyle. While the series may want its Michael Mann-esque heroic privilege bad enough to put this bit of silliness in the everyday-cop’s storyline, at least the explanation for how he’d afford such a flat isn’t belabored. The episodes stick to your run-of-the-mill cop politics, and baddie scumbags. Giving a turn in the series are two regulars from “The Wire”: Lance Reddick and Jamie Hector. Reddick plays a jerk (his Twitter byline, “Yes, I smile sometimes…”, speaks to the grouchy gravitas of many of his roles), and Hector plays a sweetheart. The rest of the cast is ample and TV-attractive, as per usual. And the title credits are great – just great.

“Bosch” is one of those shows that I wish more police dramas aspired to. I’m glad we’re in for a second season: and, bravo, Amazon!