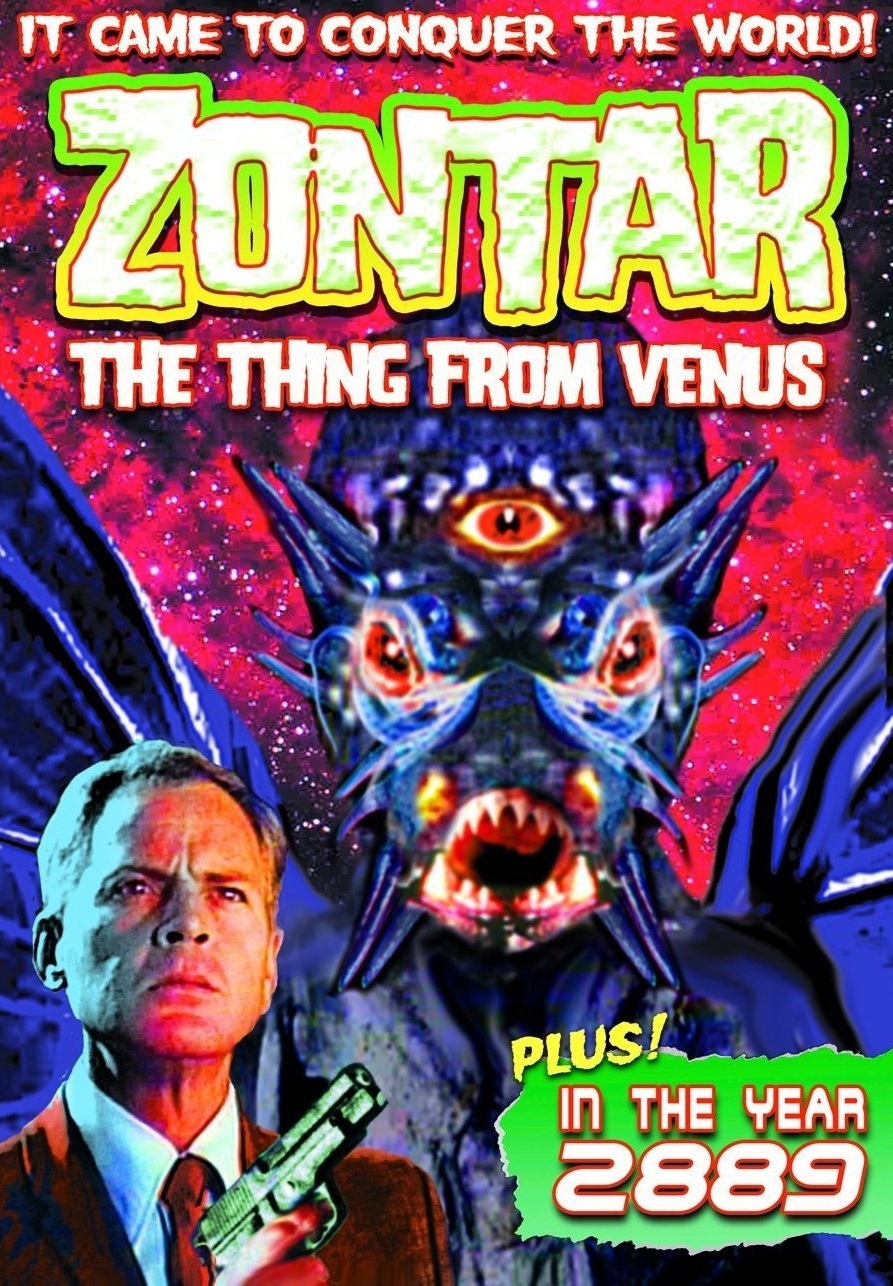 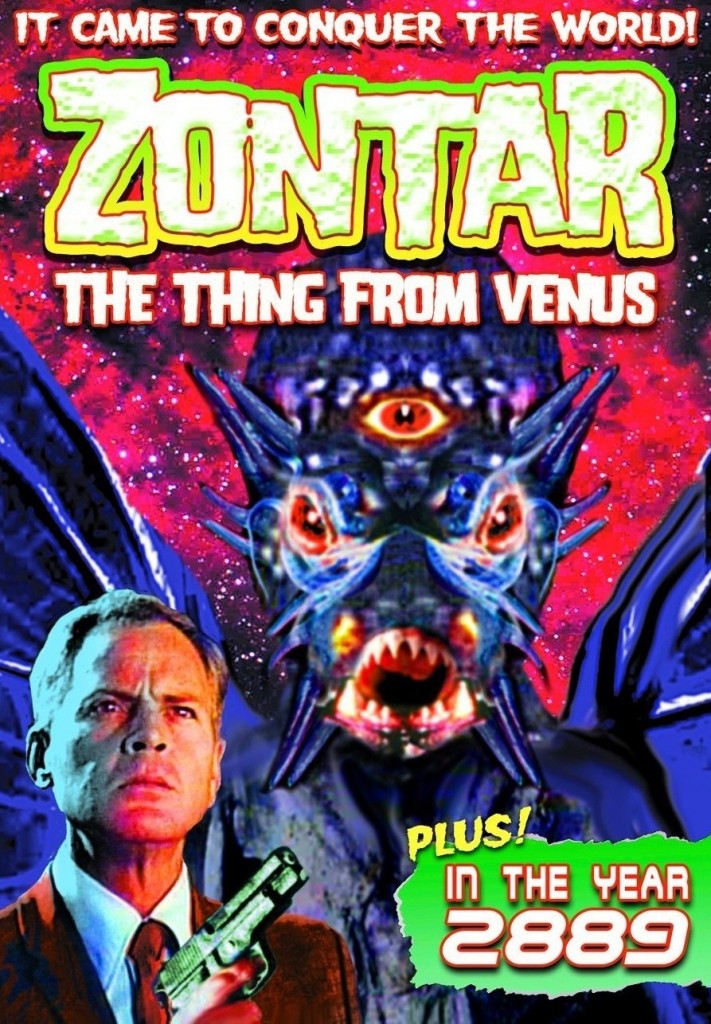 At first Zontar: The Thing From Venus (1966) directed by Larry Buchanan and starring B- and Z-grade sci-fi perennial John Agar, seems a straight-forward alien-monster-invades-Earth-using-mind-control film. We’ve got a couple scientist dudes arguing about how to deal. Some ladies are in the movie; they scream and get killed off. The monster hides in a cave while all this is going down. To do his evil works, he sends evil flying-foil-lobster emissaries and puts most his effort into messing with utilities and municipalities, including garden hoses.

But – Zontar has a special distinction here for me at B-movie BFFs: it made me examine my motives and my writing voice. Do I write as if to fans of genre (and sub-genre, and Z-grade film) – or to my friends or passing acquaintances?

WHY DO I WATCH THESE FILMS? why oh god WHYyyy

Okay. A few facts you should know: the titular monster from the film, the one you see in the actual film, is similar-looking but much less convincing than that depiction above. Yeah, you heard me right.

Also: Zontar is a 10-years-on remake of the Roger Corman classic It Conquered The World (1956). ICTW was a better film (more budget, better actors, a talented director), but neither film are all that great due to a threadbare plot and a pretty dern silly-looking creature reveal in both films. And while your average person might have caught a glimpse of the nameless evil-carrot creature from the original film, only genre purists or those caught up in the middle of the night watching God-knows-what will have feasted their eyes on the lukewarm cheese-product nacho dip that is Zontar.

MSTie kids will like this film for two reasons (provided they can bring themselves to watch films without riffs). One: Larry Buchanan directs (he of The The Eye Creatures notoriety – Eye Creatures was also an AIP remake of a better film), and Zontar bears a lot of similarities and a couple actors. Second: origin film It Conquered The World was itself sent up for riffing on the show – and that’s where most of us first got the thrill of hearing Peter Graves’ message-y, self-important speech at the film’s finale (John Agar does a version for Zontar… it’s just not quite as good/bad).

All that said, if you’re a B- and Z-grade movie phreak like I am, you are going to like this film. Buchanan’s ethos reminds me of Ed Wood’s (as per the recent Monster Kid Radio discussion)… in both cases, their filmmaking was skillful enough there’s no way they didn’t know they were making a poor film. But their vision and tenacity keeps every scene tightly-crafted and oddly, weirdly, focussed. It’s like one of those recipes that throws together really hideous ingredients that don’t photograph well – but may or may not taste kinda good. After all this film and Buchanan’s works, incredibly, spawned a fan magazine that ran off and on for 11 years.

My husband fell asleep about ten minutes into the film, leaving me to ruefully suffer on my own. But by the end of the movie I’d looked up a few of Buchanan’s other works, glimpsed a few other incredibly-terrible monsters, and decided to watch a couple more of his flicks. Maybe Zontar (the monster and the movie) has more persuasive powers than we realize! 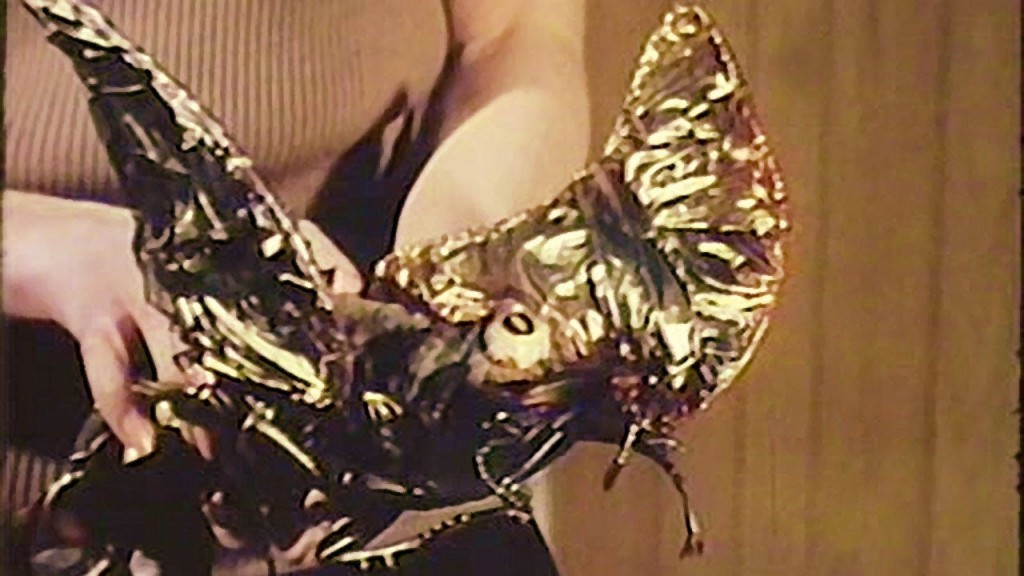