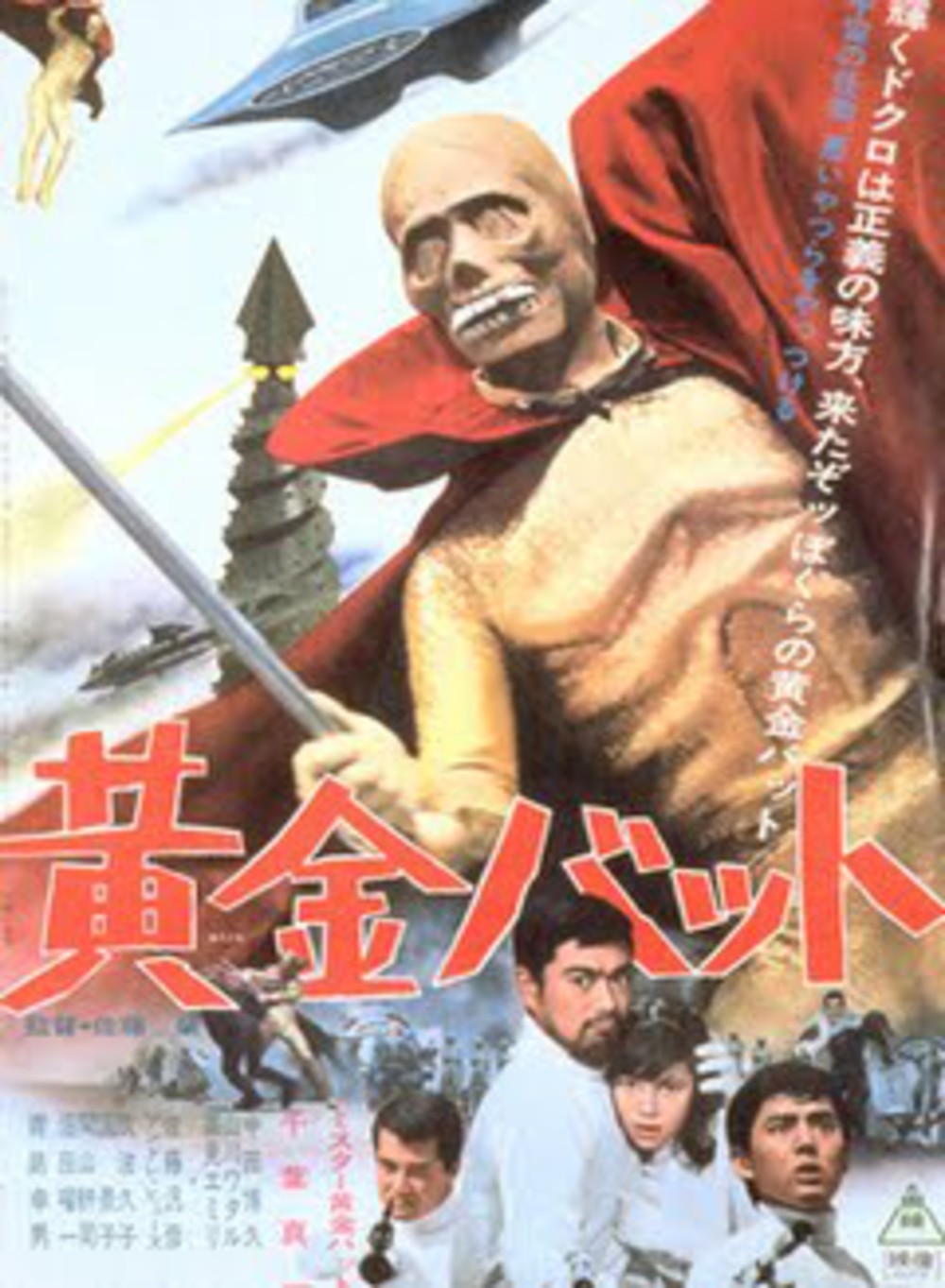 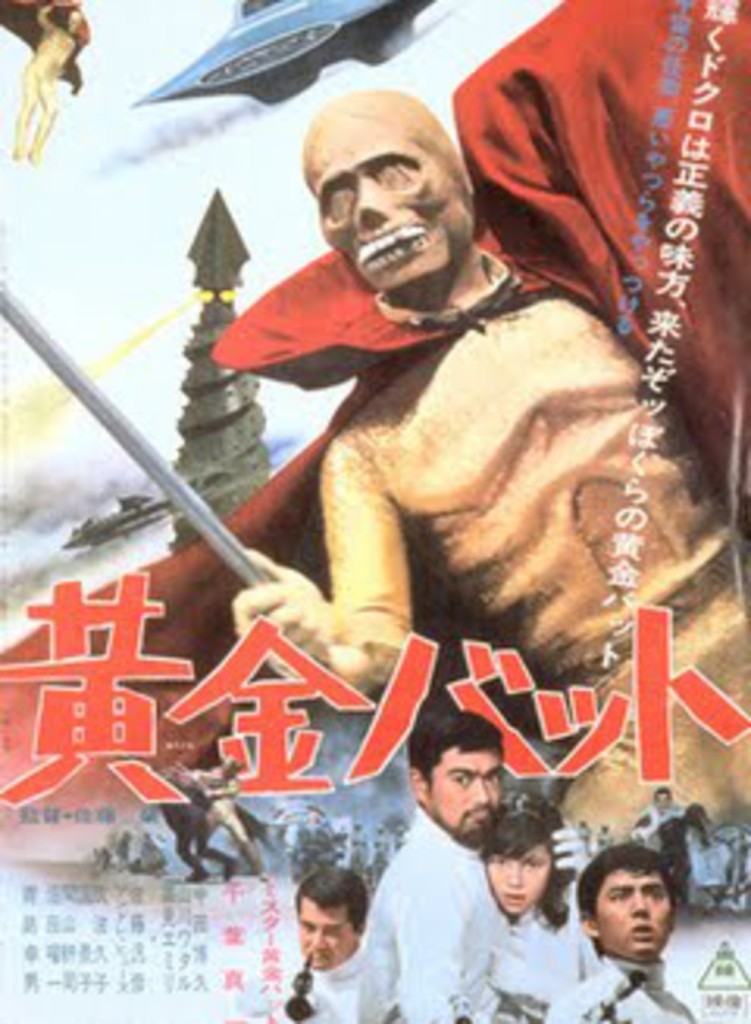 The Golden Bat (the bat) is a new species discovered in Bolivia last year. But The Golden Bat (the immortal caped being with an unconvincing skull-face) is a comic creation from 1930 known to be the first Japanese superhero – and widely regarded as the first modern superhero, period. His beloved place in the annals of fictional heroes probably accounts for a film that is surprisingly well-crafted (especially the photography) and remains endearing even today, despite a few liabilities.

The story: a young science enthusiast discovers mankind is doomed, as the planetoid Icarus (why’d we name it that? Seems like inviting disaster!) has mysteriously changed course and is all set to plummet into pretty soon Earth. Not to worry! A super-secret band of scientists, led by Sonny Chiba (who keeps his martial-artist bod under an Orlon turtleneck and implausibly-highwaisted trousers) has created a death ray that will take care of the errant cosmic torpedo. (It’s not called a “death ray”, it’s called something else but – let’s face it, it’s a death ray!) Well, they’ve created most of a death ray. They just need one teensy part missing – the part that makes it work, that is a lens. The lens will need to formed from a material no one’s yet discovered (these are some pretty good scientists!).

But hey – here’s where we get lucky again! The Special Team division of the scientists crash-land on an island (unfortunately for them, perishing in the process). It turns out that island is Atlantis! And on Atlantis is a mysterious mineral – perfect for manufacturing the Death Ray lens! Oh – Atlantis also houses an odd, skeletal being that is hanging out in a tomb. The scientists immediately wake up this creature (I told you they were smart!) and he says something like, “Look, I’m here to help y’all out just in case some evil comes to destroy man!”).

He gets to help out pretty much right away. For instance, here he is dispensing his Bat of Justice (which in no way resembles a “bat”, and seems to just deal out regular, non-justicey ass-whoppin’):

Enter Nazo, the evil alien overlord who as it turns out – dun dun DUN!!! – is responsible for Icarus’ course-change in the first place. This Nazo, despite possessing powerful resources such as teleportation, a seemingly endless platoon of evil soldiers, all kinds of death rays, and armed, manned spaceflight, is set on smiting mankind with the planetoid, so he’s totally pissed there’s a Death Ray that can destroy his plans. 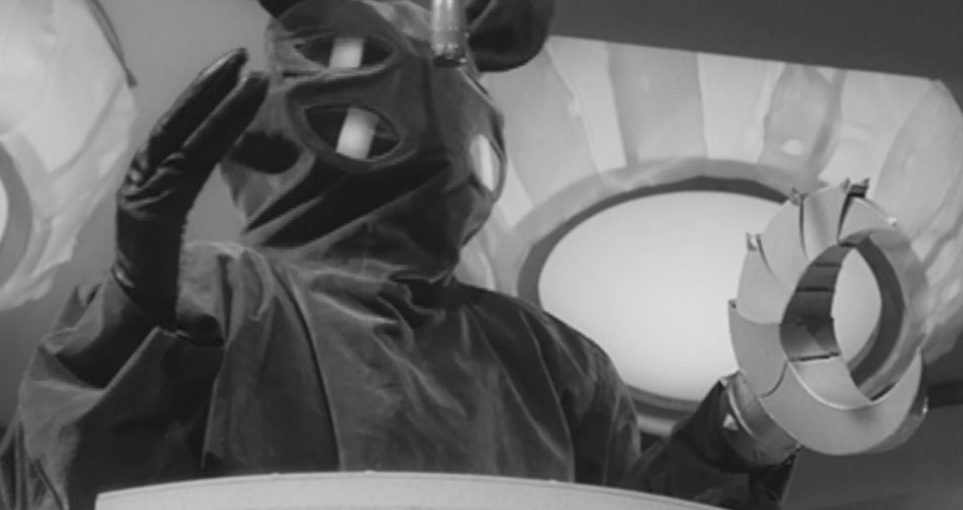 Now, I’ve seen my fair share of Japanese superhero film and telly featuring silly-looking bad guys – but Nazo takes the cake, being a lumpy, four-eyed lambs’-eared sports mascot with a claw for a right hand. He stays put in his little bad guy captain seat and dispatches henchmen Jackal, Piranha – and, inexplicably, Keloid. (Wait – what’s a “keloid”? Here’s a Google image search – you were warned!). By the way, Keloid ends up stealing the show, delivering a maniacal, over-the-top camp performance rivaling the villains of the beloved “Batman” series. 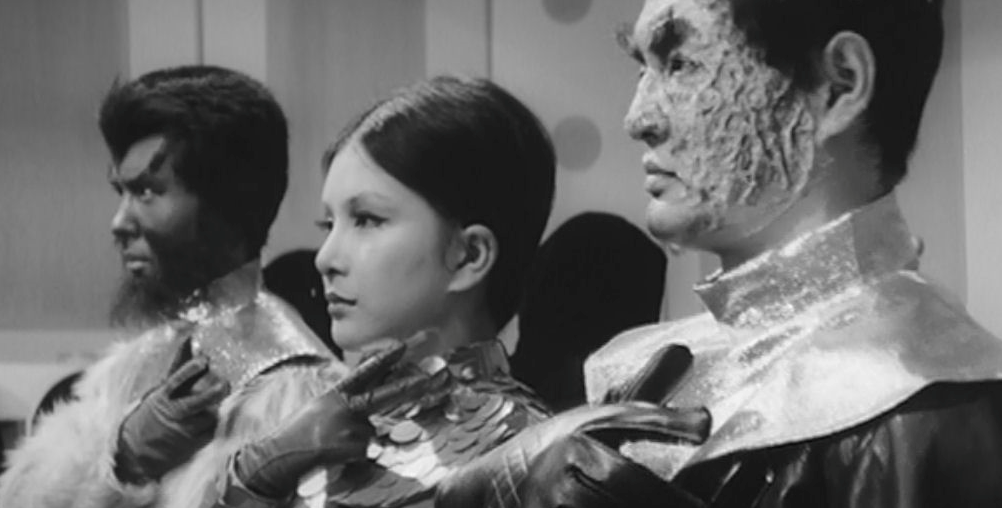 And of course, it wouldn’t be one of these old Japanese sci-fi films without a kid running around, a kid with a psychic connection to the superhero. This film has the added bonus of featuring unconvincing bats that flap around here and there. I only wish there was a color version!

I won’t spoil the ending for you except to say yeah, it involves a showdown between the two powerful forces. And yeah, it involves a deus ex machina. Even given the predictable aspects of the story, The Golden Bat is a totally awesome Japanese superhero film, and I’m completely baffled at why it has been so overlooked. It’s pretty faaaaabulous!