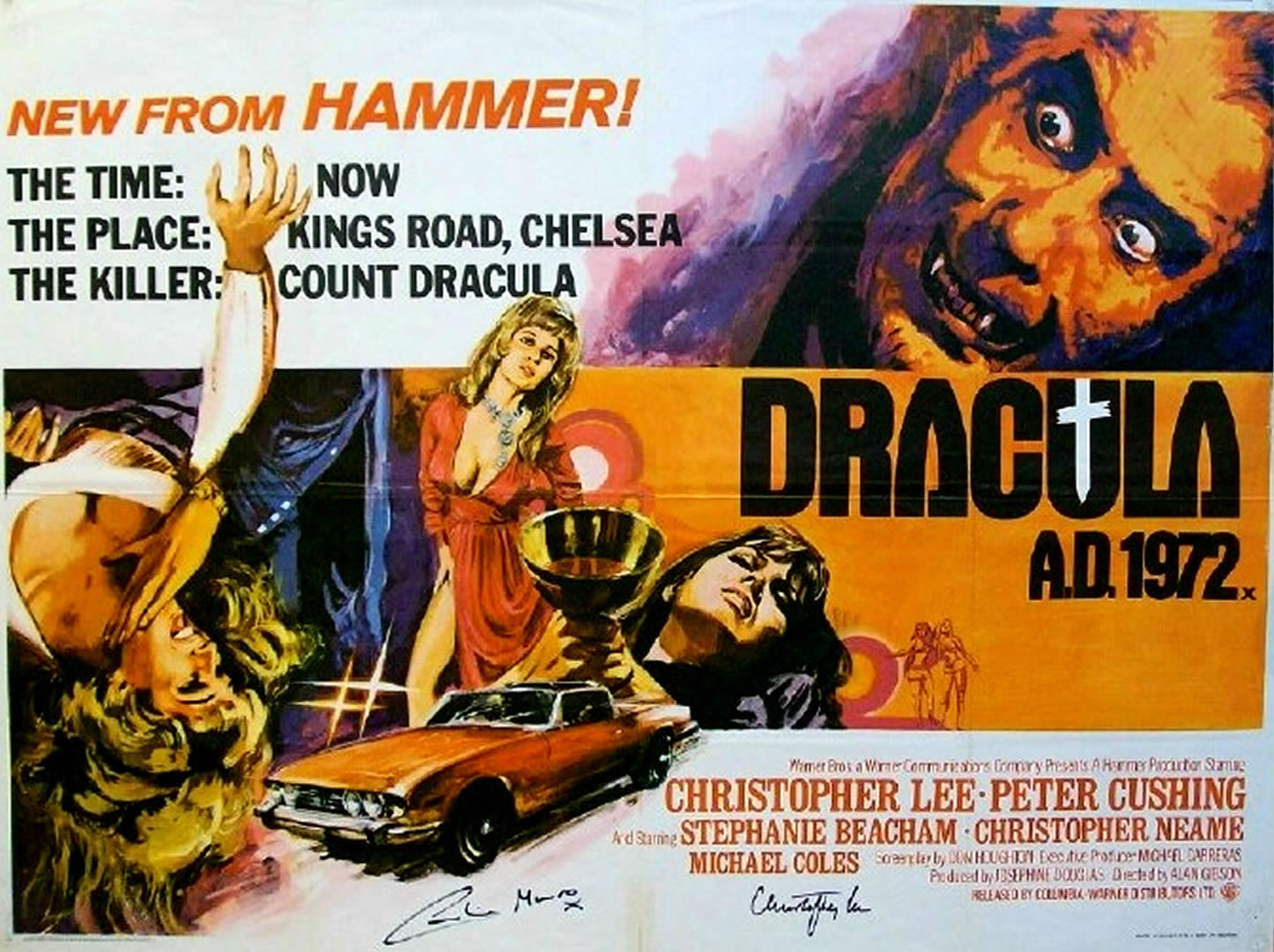 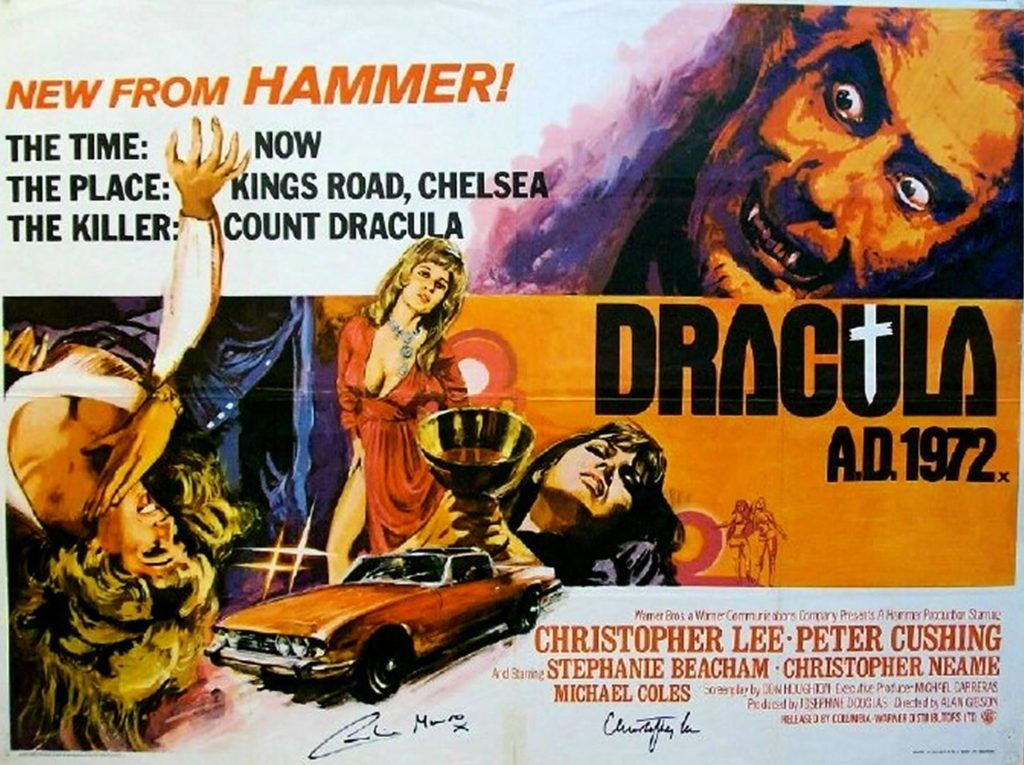 In 1872, Count Dracula (Christopher Lee) and his bedraggled archenemy Van Helsing (Peter Cushing) do deadly battle on a stagecoach – in Hyde Park (I know… I don’t get it, either). After a brief struggle they both showily perish from their wounds. At Van Helsing’s funeral a smug-ugly little creep (Christopher Neame) sneaks up, collects a bit of Dracula’s dusty remains, and buries them near Van Helsing. Then – boom! – the credits are up and we’re suddenly 100 years later: a “modern” soundtrack introduces us to modern-day Chelsea, London (all the while looking and sounding like a promotional video). Next, we’re at some stodgy flat where a very “groovy” party is disrupting what looks like an upper-crust cocktail party. It’s actually one of the worst “hippie” parties I’ve ever seen onscreen, and agonizes us for about ten minutes while the hard-working ensemble group Stoneground tortures us with a couple songs. This scene does briefly feature a young Michael Kitchen; I include a screencap here for kicks: 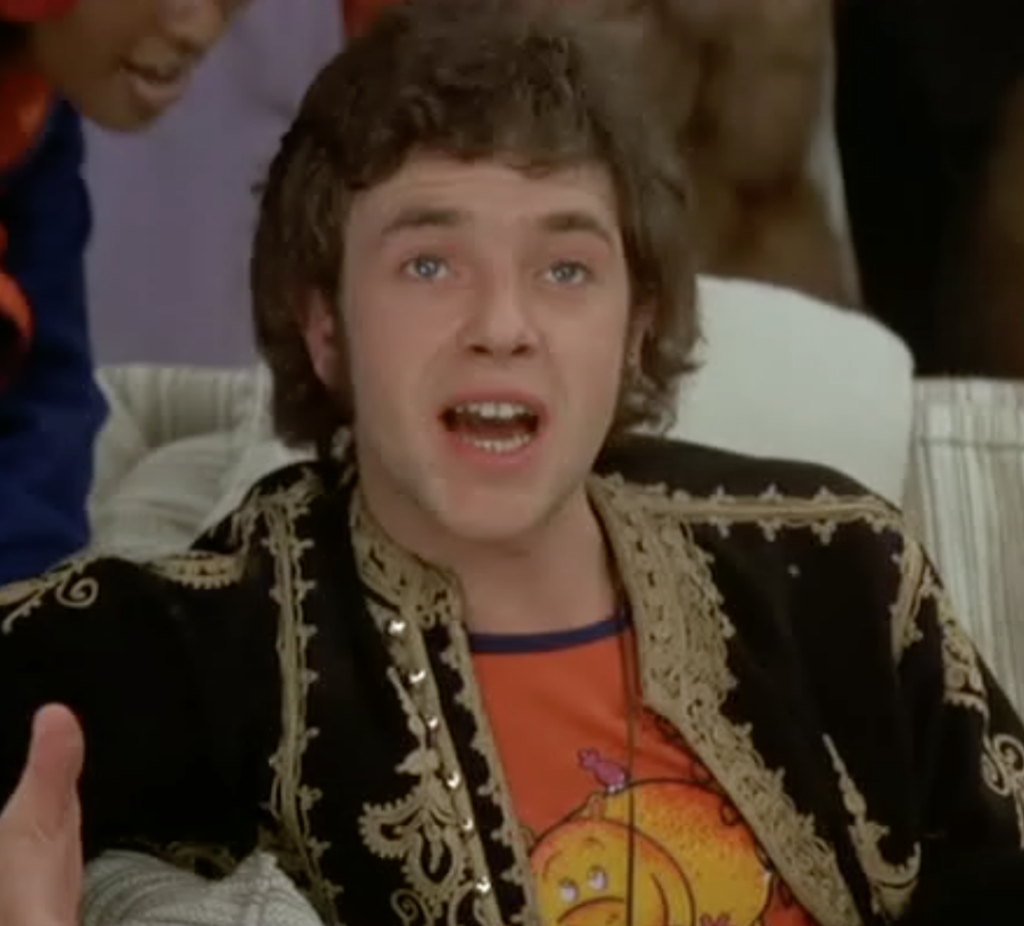 At the party Johnny (played by Neame, the same actor who played the 1872 creep) and a few of his rambunctious cohorts including Jessica (Stephanie Beacham), Gaynor (Marsha Hunt), Laura (Caroline Munro), and Anna (Janet Key) beat it after “the fuzz” is called. (It should be noted no one was doing anything remotely illegal – just dancing badly.) After the party at their favorite coffee bar, Johnny convinces the others to sneak out to a desanctified church for a little Black Mass and – his secret! – summoning up the Count.

From there, the film progresses through a “trippy” seance, a few vampire murders, a lot of sweaty nightmares, Peter Cushing getting involved and halfheartedly trying to convince the local plod, and Christopher Lee stalking about and bearing his teeth. The premise of “Dracula in the modern age” is fantastic, and the cast are adept and (mostly) cute. But it’s still a pretty hard sell. For crying out loud, Johnny’s last name is “Aculard” – and if that isn’t corny enough, the movie then points out how it’s a clever “Dracula” cipher. 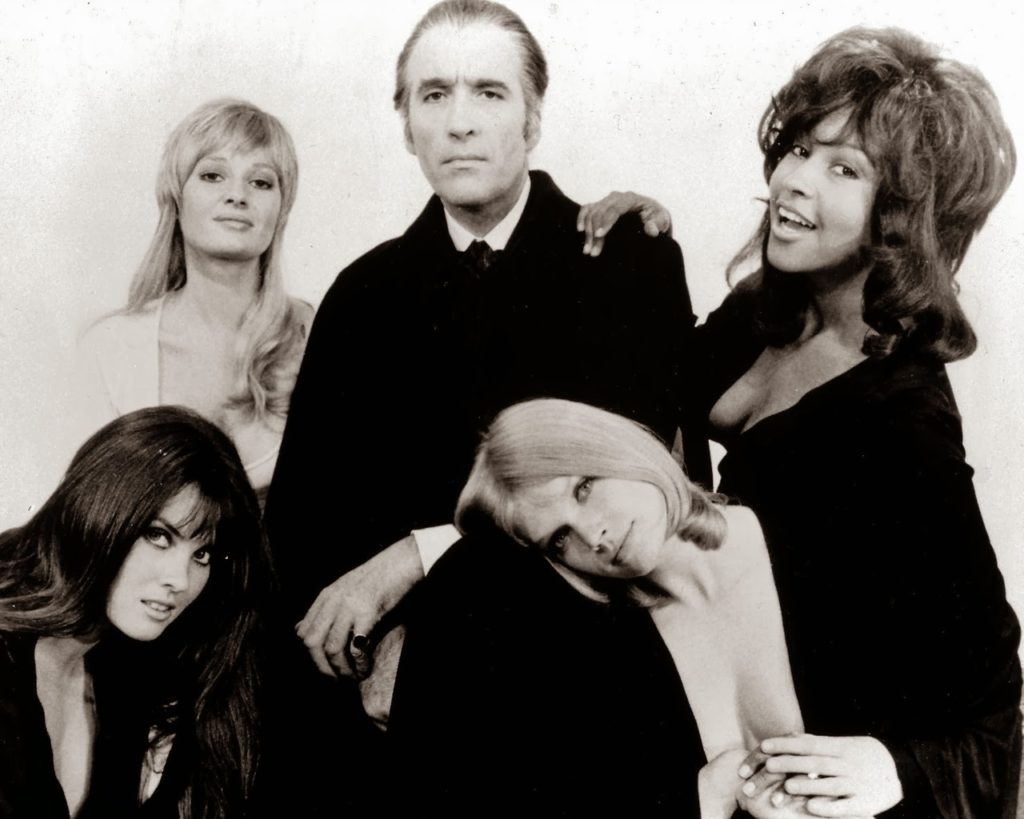 Despite some serious impediments – perhaps worst of all, the made-for-TV-esque score and some hideous fashion monstrosities – Cushing and Lee bring a bit of dignity to what must have felt a rather tired cliche. The beauties in the film are both lovely and charismatic – especially the always-stunning Munro and a rather sweet turn by Beacham. Hammer- or Dracula-completists will want to watch the film. But otherwise, there aren’t many scares and the laughs to be had are, sadly, unintentional.