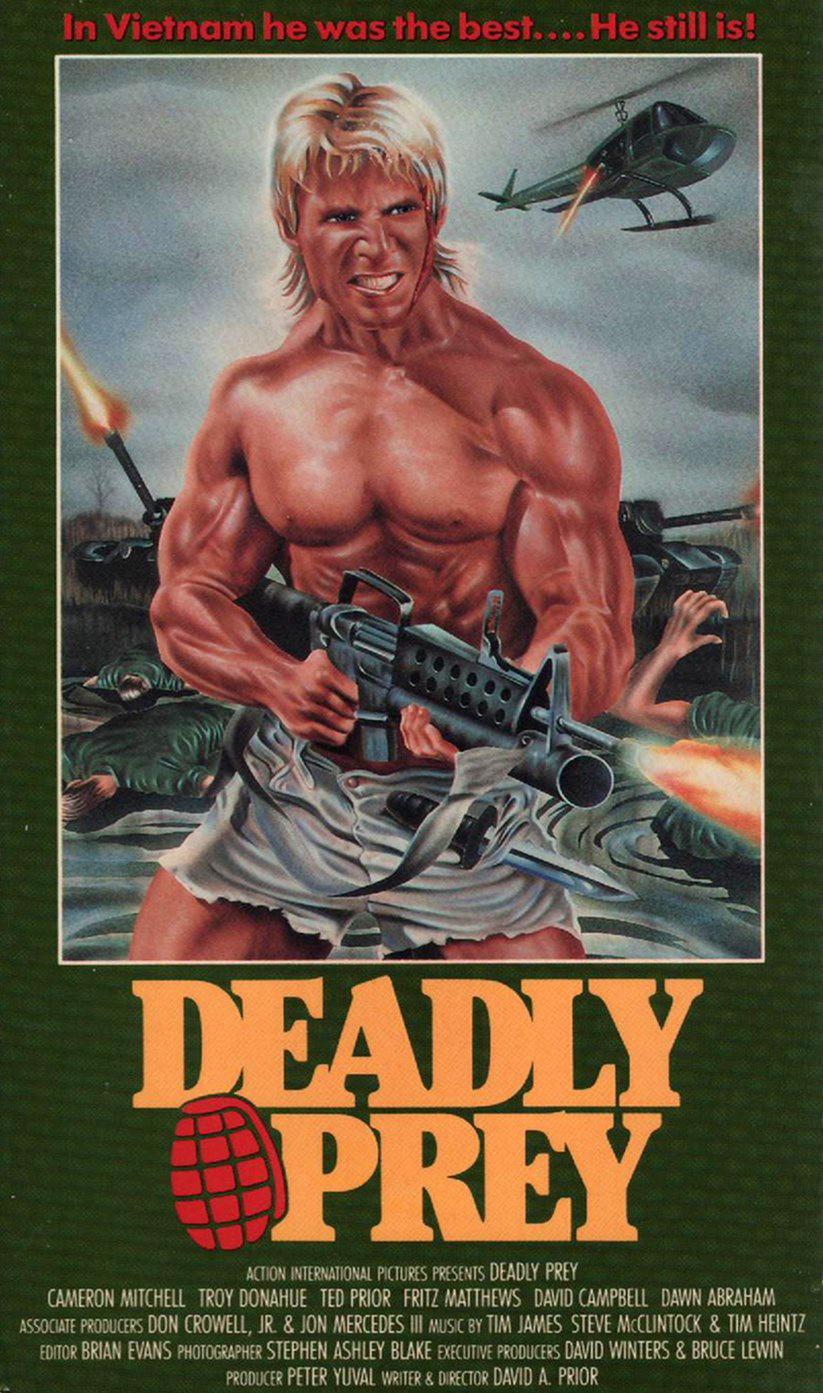 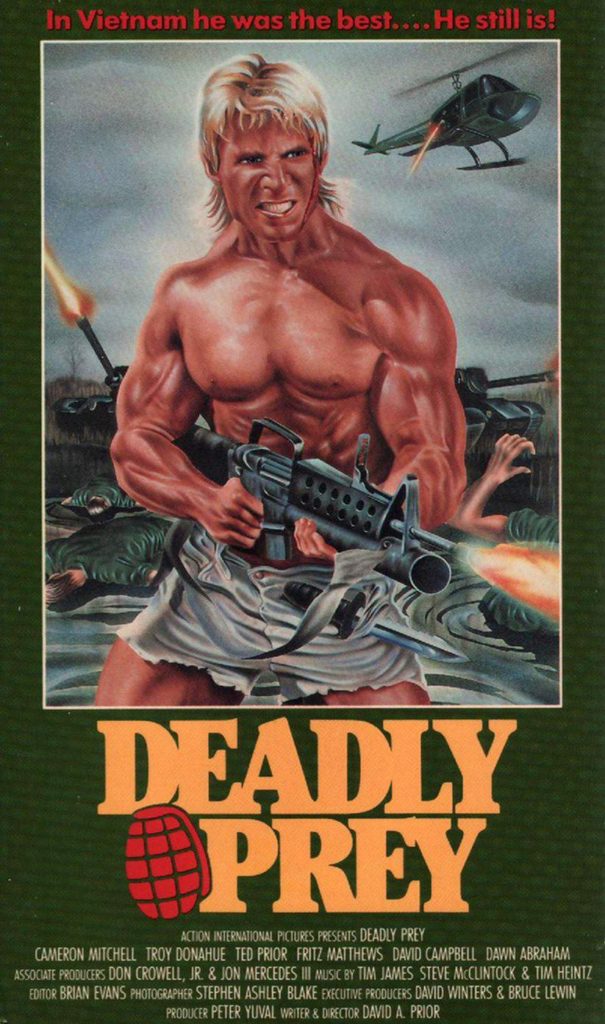 Despite incredibly promising poster art, Deadly Prey is a rather lukewarm effort that combines “The Most Dangerous Game” (the 1924 short story by Richard Connell) and a knockoff of 1982’s First Blood (the original John Rambo film) – and hopes those two premises are enough for a 90 minute runtime.

I’ll leave you to decide.

In the plot Danton (I forget his first name), a happily-married suburbanite who sleeps in a waterbed and wears weightlifting leisurewear, steps outside one morning to put the garbage out. He is ambushed by a van full of thugs who sport him to a secret paramilitary base within stone’s throw of Los Angeles (?!?), take off his shirt (why?), and then force him to run around the woods while they hunt him for practice. Except it turns out they by-coincidence TOTALLY kidnapped the main honcho Hogan’s ex Nam-buddy, and he’s really super good at murdering people and surviving out in the woods eating worms (true story, and sadly we do get some real live worm-eating in the film). 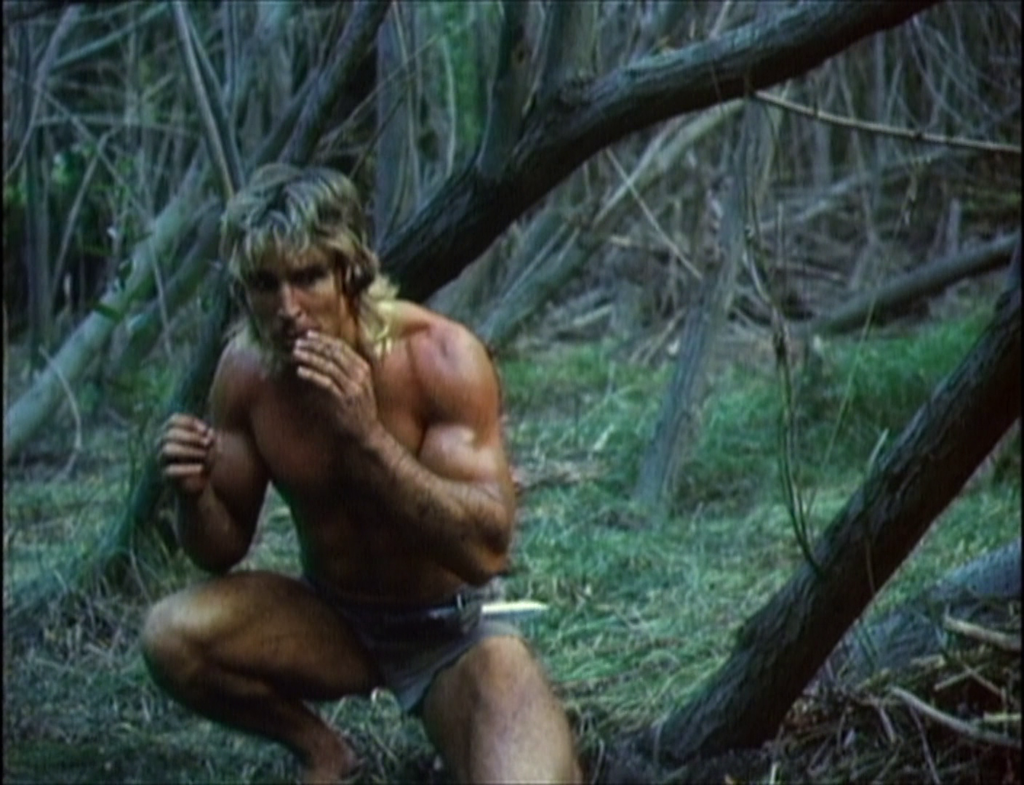 Directed by David Prior (who helmed several exploitation 80s dramas) and starring his brother Ted, Deadly Prey isn’t quite “so bad it’s good” because it is bereft of anything interesting unless you like watching a bunch of dudes getting killed by sharpened sticks. Most of the film consists of commando thugs – displaying none of the skills we’d expect for being ex-Special Forces – jogging through underbrush and getting offed by Danton, who was disturbingly ready to start murdering ASAP (the body count for this film is over 50 people). There are two women in the film (Suzanne Tara and Dawn Abraham), and the film is super-skeezy about how it treats both of them. The rest of the cast is sweaty, mumbles their lines, and provides neither comic relief, pathos, or storyline. B-movie icon Cameron Mitchell and 50s/60s heart-throb Troy Donahue are both wasted in roles that aren’t much in terms of character or dialogue.

Notably, Prior’s impressive buffed-out physique (maintained by “Jack Daniels, beer, and chili dogs” by the actor’s own admission) is oiled up and on display in a pair of jean shorts that are now, unfortunately, emblazoned on my mind. At one point he has the chance to get showered and dressed before running off to fight in the woods some more, but. Well. Maybe the guy is allergic to shirts.

Definitely a film for anyone who enjoys Rambo knock-offs or has the perverse desire to watch all of Cameron Mitchell’s works (and I may be in one or both of those camps), but otherwise rather boilerplate 80s rated-R action fodder. The film is made more palatable by the Rifftrax, released in late 2016.