The myth, the man, the Walken: The Prophecy franchise

Remember when Christopher Walken played a villainous angel that needed a come to Jesus moment of his own? No, it wasn’t Dogma, it was… The Prophecy! And I’m here to guide you through each movie of the franchise step by step.

That’s another hallmark of mine, I can’t do too many book series but I will sit through all seven movies of a franchise if I have to and I like it. Oh, and I like Christopher Walken a lot but that’s not a special trait. Walken is more meme than man at this point, but I will never stop stamping my foot and handing in his credentials as a Real Actor.

That being said, there’s no denying that Walken is a cult figure and has been for decades. The Prophecy series is interesting in that in the grand scheme of Walken’s filmography, it’s neither the worst nor the best thing he’s ever done. It’s certainly the most different. It’s cult status also seems to ride purely on his performance. Personally, I will (and I am about to) argue there’s a lot more going on here than Walken acting at mid-level Walken. But let’s not take my word for it, let’s let the movies speak for themselves: 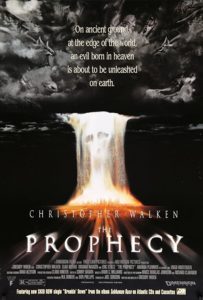 The first movie in the series begins on an ominous note when lapsed Catholic Thomas Dagget (played very ruggedly by Elias Koteas) receives a visit from fallen angel Simon. Simon warns Thomas very cryptically of the upcoming war between the angels before vanishing. We later meet antagonist angel Gabriel (Walken) and quickly learn he’s a massive jerk when he stops hapless bystander Jerry at the moment of his suicide and keeps him in a state of limbo to do his bidding. Yikes.

The final piece of the puzzle here is Mary, a young Native American girl possessed by the evil spirit of Arnold Hawthorne. Gabriel is looking for the soul and therefore Mary is in grave danger. From here on, the movie gets a bit convoluted and weird as it explores the angels’ war against each other, God, and mankind. The Last Temptation of Christ it is not but it does a pretty interesting job of showing how unchecked pettiness can destroy the world.

All jokes aside, Walken as the dangerously petulant Gabriel isn’t even the main attraction here. It’s the brutal and unsaintly depiction of angels as monsters that literally don’t understand humanity and would rather destroy it. They actively hunt humanity like a pack of celestial wolves. Believe it or not, Viggo Mortensen as Lucifer usurps Walken even with limited screen time as the two of them battle over who can chew the most scenery. The What Measure Is A Human? commentary is a very stare-at-your-navel ’90s concept but it’s more poignant than most attempts of its era. Not exactly Walken’s best anti-villain or villain turn, but he gets started on the path of redemption in The Prophecy II. 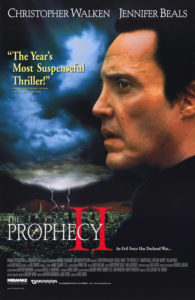 In II, Gabriel is burped out of Hell by an irate Lucifer and he lands back on Earth. He quickly learns that he must prevent the union of an angel and a human woman because it might end the franchise early with the reconciliation of the warring factions of angels. The first movie sets Gabriel up as incredibly petty and bitter so he can’t have this, so he sets off on a quest to find either Danyael (painfully attractive Russell Wong) and/or Valerie (Jennifer Beale) and stop this nonsense. We have two more movies left so you can imagine this didn’t go well for him, but II is my personal favorite in the series. Gabriel gets some serious comeuppance in the form of Valerie, who tells him all his woes are his own fault in so many words. And they are!

My main beef with this movie is that it escapes the obvious comparisons to The Terminator but doesn’t really continue the nature of the ongoing war between the angels, themselves, and humanity. Other than the obviously evil Gabriel, sometimes I watch this and I still don’t know who is on what side and why. This gets a little help in The Prophecy III: The Ascent where everyone is FINALLY good and/or evil and not stuck in 90s anti-hero mode.

By the time we get to The Ascent, Gabriel has been firmly checked by life and has lost his angelic powers and become a human vagrant with shades of Bruce Willis in 12 Monkeys. After wandering the Earth as the war in Heaven still rages, Gabriel gets his Come To Jesus moment and realized maybe Valerie was right and his misanthropy has been misplaced. This is great, because now he has to take care of the nephilim child he tried to kill in II, Danyael (Junior?) as played by early teen movie staple Dave Buzzota. Danyael is an angsty teen but he has right to be as his supernatural and human parents are deceased and the only person he can rely on for guidance is the man that tried to kill them. There is minimal Walken in this movie which doesn’t make it bad, as it gives time to focus on Danyael who is equal parts street urchin and Christ figure. I could have stood a little more focus on whatever is going on with Walken’s wig, but I think his character arc successfully and satisfyingly concludes here without going over the top. Director Lussier takes III on a much more action-oriented path and because it’s 2000, we have to deal with a lot of men in dark suits and sunglasses chasing teenagers in broad daylight. Incidentally, Lussier went on to direct the Dracula 2000 trilogy which… yeah.

So, Walken gets his character redemption and the series is over, yeah? Not quite. 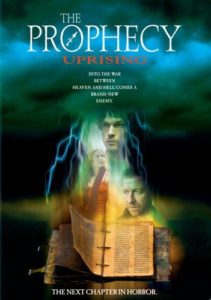 You could have put the lady protagonist in the frame, or focus on the dudes! Whichever.

Uprising and Forsaken to me are more of a duology than a continuation of the original trilogy. Yes they’re connected and set in the same general universe, but they greatly distill the mythology of the first three movies into something far more manageable. And sure, they look like a Full Moon Horror direct to rental special but you know what?

Yes, Kari is our new protagonist Allison who is currently being used as a pawn by the good and bad angels. Her story begins in Uprising and concludes with Forsaken which feels like it takes place a day later. Yes, in this movie we finally get some decent distinction between what exactly the bad angels want (extinction of humanity) and what the good angels want (humanity surviving). It’s a bit androcentric but it works. In Uprising, the angels are on the search for the final chapter of the Book of Revelations which will reveal the name of the Antichrist.

If you’re familiar with the tropes of religious horror, this will sound pretty stock. And this movie is pretty much all about the war between the angels and demons that we’ve been hearing about since Gabriel. But where this movie succeeds is expressing everyone’s war fatigue while also keeping the philosophical vision of the first movie. There are firm good and bad camps now but everyone still blurs the lines between right and wrong. Why? Because angels are above it all, of course!

Or are they? These are the questions we will grapple with. To be honest, if this film could pull itself away from the preset Prophecy ‘verse it would have done alright. It has a perfectly good beginning, middle, and not the best end but a strong ending. Oh, but you know they had to squeeze one more drop of blood from this stone. 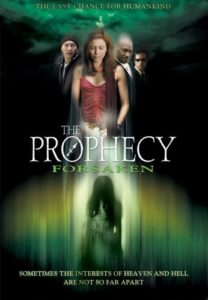 No lightning? No fire? Off brand.

Forsaken. Oh boy did we get forsaken here. This movie is the closest to articulating why I do not want a live action Neon Genesis Evangelion. Because it’s a mess.

We’re still in Romania, somehow, with Allison, who is still protecting the cursed book with her very life. The war between the angels is over… sort of… until it’s not anymore. Well, it’s a different breed of angels. These are Thrones, which are mentioned in the Bible as being one of the highest classes of angels and the bearers of God’s throne. That excited me because I quite enjoy the studies and theories of angels as well as demonology. But these guys are dressed up Mr. Smiths because everyone was copying The Matrix at this point. Ugh.

So this movie focuses heavily on chase scenes throughout the streets of Romania and various plot twists and more convoluted explanations of what Stark and his game of Thrones want because the truth is they don’t really want anything but to get the jump on ending the world before God. Seriously! If you’ve tolerated this franchise so far, this entry is beyond repent. It’s not suffering from a lack of Walken, it’s suffering from wanting to do too little with too much time on its hands. Sigh! It had the makings of a pretty decent sequel even for a movie that didn’t need one, but it just never picks up speed. And in the end they have the nerve to drop another sequel hook… stahp! Fortunately, it never came to pass as this film came out in 2005 and we haven’t heard any rumblings of angels against mankind since. Man, how do you waste Kari Wuhrer, John Light, AND Tony Todd?

And so concludes our journey of light and love through the halls of The Prophecy franchise. I would highly suggest the original trilogy and just pick one out of IV and V, preferably IV. Maintain your hope, your faith, your reason, and whatever is left of your humanity and ascend, my friends!