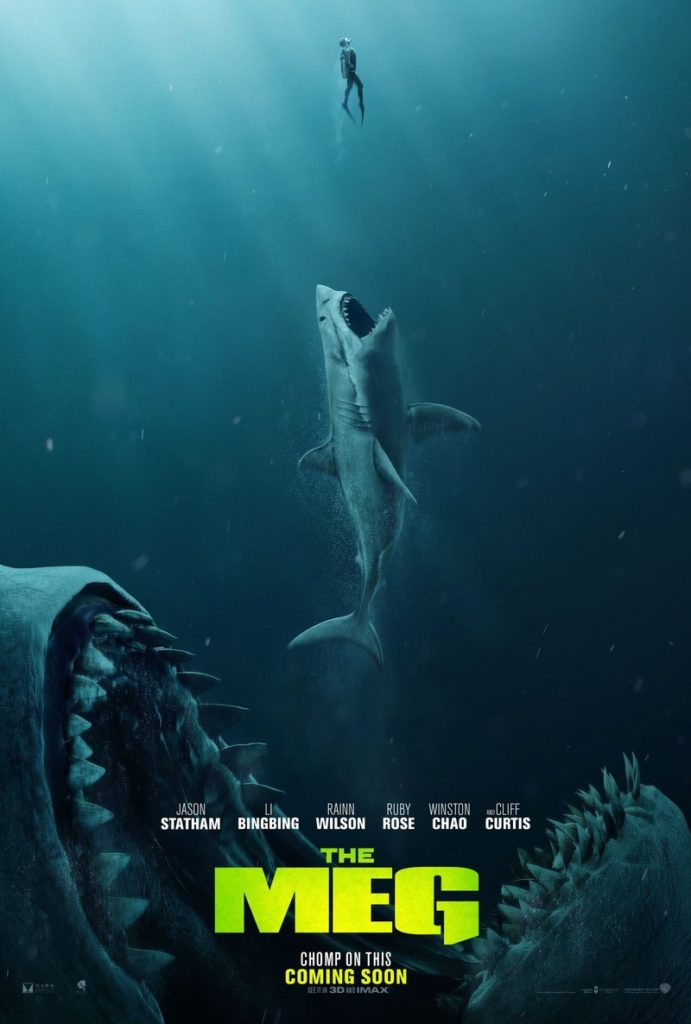 Having just watched The Meg at the drive-in last week, I was discussing he film with a friend last night. In explaining the movie to a third party listening in, my friend simply said,

I mean really – who goes to a giant prehistoric shark action film with any other expectation than… a giant prehistoric shark action film? Shark movies got their big boost with the history-changing Jaws (1975), but these days they are mostly just aquatic slashers. We have exceptions of course, but in general audiences are looking for a gory body count, convincing special effects, a thalassophobia jolt, and maybe a hottie or two in a wetsuit. The Meg‘s hottie is delivered us via 51-year old Jason Statham, whom I’ve always rather enjoyed came to adore after his hilarious turn in 2015’s Spy. Statham plays Jonas Taylor (Jonas… get it?), a deep sea rescue Macho Man who is haunted (of course) by demons of his past.

While Jonas drunkenly nurses his psychological wounds in a remote Thai village, a team of scientists at the underwater lab “Mana One” set up for their most ambitious mission yet: exploring a “false bottom” of the Marianas Trench. Billionaire villain Jack Morris (Rainn Wilson) arrives as the group, headed by Dr. Zhang (Winston Chao) and team captain Mac (Cliff Curtis), launches a small craft to penetrate into deep sea unknowns. Gee, I wonder what they’ll find? Sure enough, they come across a massive, hostile fish which proceeds to disable the craft and leave the crew – including Jonas’ ex-wife Lori (Jessica McNamee) – foundering with only a few hours’ air remaining.

With no time to lose, Mac helicopters to Jonas and petitions his friend for help; after the latter postures a bunch about ABSOLUTELY NOT, he will NOT be helping them – then a few minutes later decides to help them. Back at the station he meets the rest of the likable (and occasionally tasty) members of the crew as played by Robert Taylor, Page Kennedy, Ruby Rose, and Ólafur Darri Ólafsson. Jonas also locks horns a bit with Dr. Zhang’s daughter and single mom Suyin (Li Bingbing), although the two quickly form a competent partnership in their mission to find and halt the ravenous, monstrous fish. 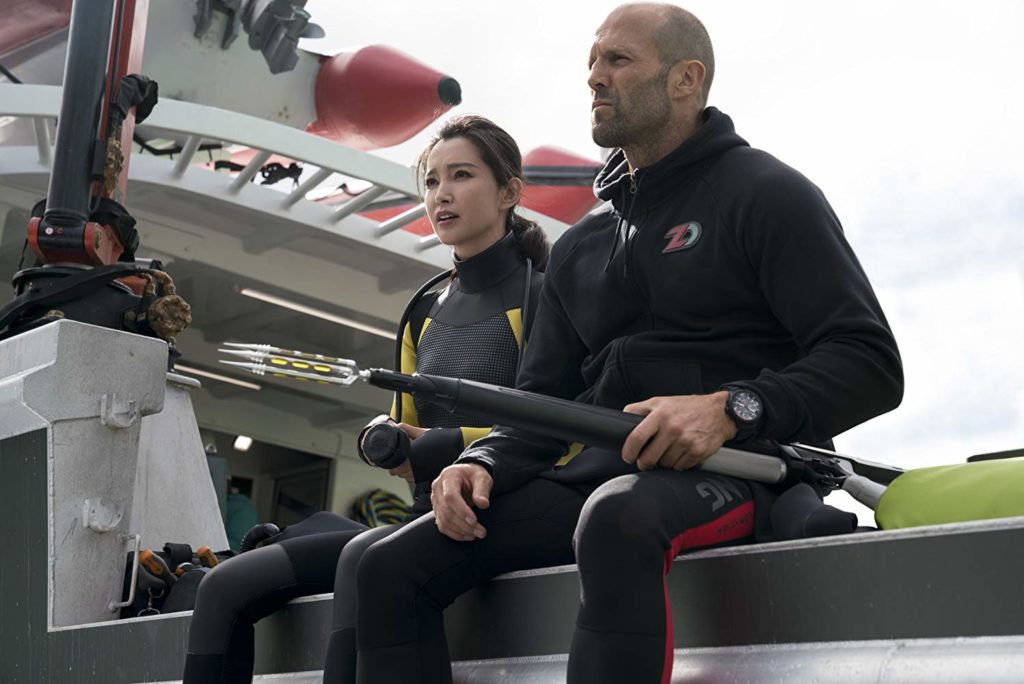 And on that count – how are the special effects? Well, they’re PRETTY good. The megalodon is scary enough, and he (or she) behaves a tiny bit more like a shark than sharks usually do in films like these. For instance: in the film you often can see the animal moving at the waterline, not JUST the sinister dorsal fin. That said, of course the shark is not entirely realistic: for instance she seems to have a ravenous appetite entirely focussed on people, more people, and the occasional ship. And while The Meg knows it needs to provide a body count, the movie lacks the general mean-spiritedness of most shark thrillers. Each victim is mourned after a fashion, and characters are even shown being sad after the loss of a comrade. Statham is adorable and charming and frankly, the kind of guy you’d want to have around. He does the dirty or hazardous sharkwork that someone’s gotta do, and despite a gruff attitude he’s a pretty respectful guy when it comes to the other characters. Statham and BingBing’s courtship is also some of the cutest flirting I’ve ever seen in a film; their little romance is a cut above what I’ve come to expect in action films.

There is no environmental message nor larger picture – this is a film about a big frikkin’ shark that wants to trample and eat everything it sees, and the people who are trying to stop it. Honestly? If you want something else from your summer blockbuster, I’m not sure what to tell you.